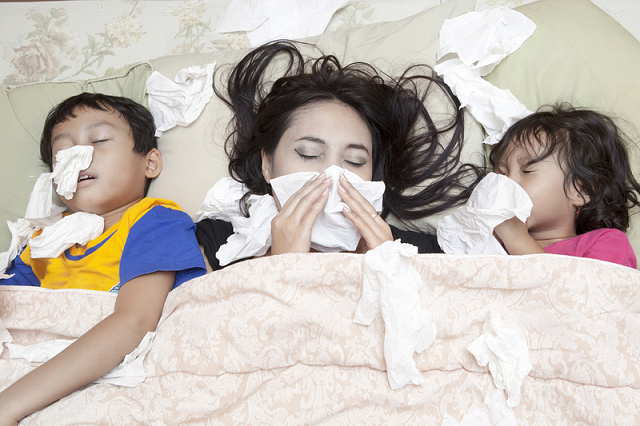 What is Influenza (The Flu)?

The flu is a contagious respiratory illness caused by influenza viruses. It can cause mild to severe illness, and at times can lead to death. The best way to prevent the flu is by getting a flu vaccine each year.

People who have the flu often feel some or all of these symptoms:

*It’s important to note that not everyone with the flu will have a fever.

Most experts believe that flu viruses spread mainly by droplets made when people with flu cough, sneeze or talk. These droplets can land in the mouths or noses of people who are nearby. Less often, a person might also get flu by touching a surface or object that has flu virus on it and then touching their own mouth, eyes or nose.

How Serious is the Flu?

Flu is unpredictable and how severe it is can vary widely from one season to the next depending on many things, including:

Certain people are at greater risk for serious complications if they get the flu. This includes older people, young children, pregnant women and people with certain health conditions (such as asthma, diabetes, or heart disease).

During 2009-2010, a new and very different flu virus (called 2009 H1N1) spread worldwide, causing the first flu pandemic in more than 40 years. It is estimated that the 2009 H1N1 pandemic resulted in more than 12,000 flu-related deaths in the U.S. In contrast to seasonal flu, nearly 90 percent of the deaths occurred among people younger than 65 years of age.

Complications of flu can include bacterial pneumonia, ear infections, sinus infections, dehydration, and worsening of chronic medical conditions, such as congestive heart failure, asthma, or diabetes.

The single best way to prevent the flu is to get a flu vaccine each season. There are two types of flu vaccines:

When to Get Vaccinated Against Seasonal Flu

Yearly flu vaccination should begin in September, or as soon as vaccine is available, and continue throughout the flu season which can last as late as May. This is because the timing and duration of flu seasons vary. While flu season can begin early as October, most of the time seasonal flu activity peaks in January or later.

Who Should Get Vaccinated?

On February 24, 2010 vaccine experts voted that everyone 6 months and older should get a flu vaccine each year starting with the 2010-2011 influenza season. CDC's Advisory Committee on Immunization Practices (ACIP) voted for "universal" flu vaccination in the U.S. to expand protection against the flu to more people. While everyone should get a flu vaccine each flu season, it’s especially important that certain people get vaccinated either because they are at high risk of having serious flu-related complications or because they live with or care for people at high risk for developing flu-related complications.

Who is at Higher Risk for Developing Flu-Related Complications?

Individuals are at higher risk if they are:

Or if they have one of the following conditions:

Who else should get vaccinated?

Other people for whom vaccination is especially important are:

The Prescription Center is an independent, family-owned and operated pharmacy located in Concord, New Hampshire. For over 50 years, we..
read more...